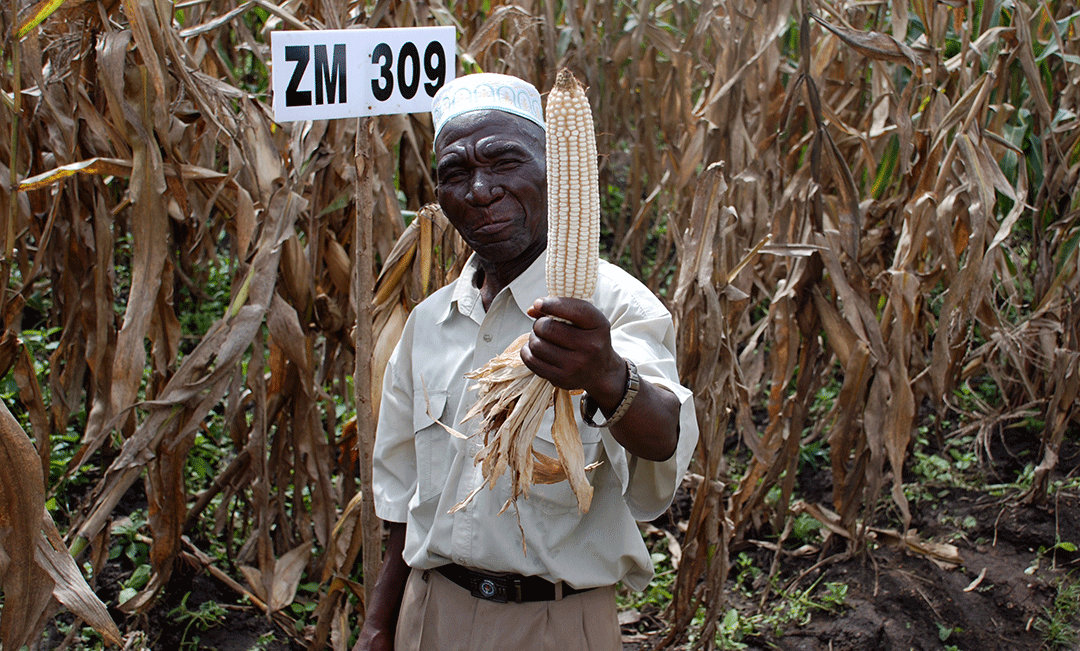 The vast majority of maize produced in Sub-Saharan Africa is rainfed, making it highly vulnerable to drought. Current estimates suggest that 25 percent of maize production in Africa is threatened by frequent drought, and 40 percent affected by occasional drought. But with rising temperatures and more severe droughts as a result of climate change, that situation is worsening. 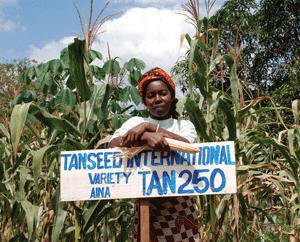 A Tanzanian farmer stands in front of her maize plot, where she grows DTMA variety TAN250

The drought-tolerant varieties bred through the Drought-Tolerant Maize for Africa (DTMA) project provide at least part of the answer. Capable of outperforming many existing varieties under good rainfall conditions as well as drought, several also have resistance to major diseases such as maize streak virus and gray leaf spot. But breeding a good variety is no guarantee of adoption, and significant challenges to commercialization exist, including production of breeder and foundation seed, achieving high seed quality, effective branding and packaging and adequate promotion of new varieties by seed companies through demonstrations.

In 2013 DTMA strengthened its connections with seed producers by establishing a joint working group with the Program for Africa’s Seed Systems (PASS), an initiative of the Alliance for a Green Revolution in Africa (AGRA). PASS already works with seed companies and agro-dealers, helping to ensure that they stock enough seed and have good distribution networks to reach farmers across the continent. Many face challenges in seed production, such as inadequate irrigation facilities and lack of personnel to manage the crop lines.

Partners to Scale Up

The work of national partners, such as the NARS, is also vital in scaling up the use of drought-tolerant maize. Supporting those partners through capacity building is therefore a central feature of the DTMA project. In the 2012-13 cropping season, DTMA trained maize breeders and technicians, rehabilitated seed storage facilities and supported research institutes to release varieties, produce breeder seed and begin hybrid seed production in places where private seed companies are not operating.

One partner, KARI, is heavily involved in drought screening activities and is also conducting household surveys across the country, in collaboration with DTMA, to gather evidence-based research findings for policy advocacy. In 2013, in partnership with CIMMYT, KARI opened two important new research facilities to speed up maize breeding and screening for resistance to MLN. These facilities will be a valuable resource for those developing new drought-tolerant varieties for partners, including NARS and small- to medium-sized seed companies.

Moving forward, DTMA project leader Tsedeke Abate said that the project will continue to work towards a number of key objectives: mainstreaming drought-tolerant varieties; enhancing seed system partnerships in collaboration with AGRA-PASS; building the capacity of NARS to produce breeder seed; mainstreaming gender within the project; and supporting further socio-economic research to provide evidence for policymakers.